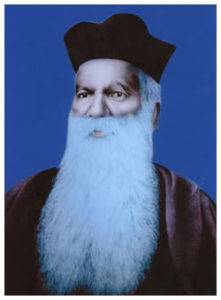 Servant of God, Fr. Sebastian L.C. Presentation was a priest of the Diocese of Alleppey, Kerala in India . He was born on 10th August 1867 at Kattoor in the Diocese of Alleppey as the 4th child of Mr. Pedero Sebastian Valiayathil and Kathtina Kurusunkal. Both Mr. Pedero’s and Kathtinas families were ancient, noble and yet God fearing. Mr. Pedero was a land lord with large land holdings and was an official of the King of Travancore who had both administrative and judicial powers similar to the present day district Collectors. The family is privileged to have had several priests, religious and University degree holders. Rev. Fr. Peter Presentation, Rev. Fr. Marcel Presentation, Rev. Fr. Bernard Presentation and Rev.Fr. Sebastian L.C. Presentation can be founded among the pearls of Latin Christian community.

Rev.Fr. Sebastian L.C. Presentation had a very deep religious formation at home. He received his first Holy communion on 8th December 1875 and Sacrament of Confirmation in 13th December 1879. He had his School education at Government School. He was quick learner and very studious right from the beginning. While he was a student at High School, he decided to commit himself to priestly studied. After completion of High School studies Fr. Sebastian was sent to Rachol Seminary in Goa for priestly formation and training. He proved himself right from the beginning a brilliant and outstanding student. He was ordained a priest at Goa on 17th September 1893 by Archbishop- Patriarch- of East Indies, Most Rev. Dr. Antonio Sebastiao Valente. As his academic performance was admirable, he was allowed to continue his studies to qualify himself for a bachelor of Divinity Degree which he completed in 1895. He had mastered 8 languages Malayalam, English, Tamil, Hindi, Latin, Spanish, Portuguese, and French.

It was his earnest desire from childhood onwards to see the local community which comprises the backward people also be benefited by the service rendered by the sisters. While doing service as the vicar of St. Michael’s church, Kattoor, he started Holy family L.P. School on May 7th 1920. Having felt the need for giving proper education to the girls by sisters themselves, he struggled hard to start a convent in Kattoor . Later with the permission of Bishop of Kochi, His Excellency Rt. Rev. Alexander Choolapprambil, Bishop of kottayam provided assistance for the Visitation sisters of kottayam Diocese to help to start a convent in kattoor. Relying entirely on Divine providence, Holy family Visitation convent was officially inaugurated on January 21, 1924 at Kattoor.

Our founder father believed that any changes to the society could be brought only through education. He founded Visitation Congregation for the integral development of children and youth especially of girls through education and formation.

314 Sisters of our congregation are working in the rural and remote areas India and abroad. Apart from Kerala, we are in the states of Orissa, Haryana, Madhyapradesh, Tamilnadu, Africa, Italy, Germany & Egypt. According to the needs of the local church we take up various apostolic activities, like running schools, Girls Homes, Home for the elderly and the sick, Home for the mentally challenged women, School for the differentially abled children, Health centers and hospitals with earnestness, the uncompromising faith, deep sense of prayer, exceptional love of the neighbour with which the founding father was inculcated.

It was due to the devoted endeavours and financial assistance of the Presentation Family that the Holy Family School at Kattoor as well as the hospital and poor home located at Thanky Junction at the 16 mile point came into being. The Holy Family convent at Kattoor and the Sacred Heart Seminary of Alleppey came into being, thanks to the diligent efforts of Rev. Fr. Sebastian Presentation and Marsal Presentation respectively. The services rendered by the Presentation Family for the progress of the Country and the welfare of the community are outstanding and memorable